Recently I viewed a television special on Stephen King "A Night at the Movies", where the famous horror author discusses the horror genre and his influences of movies on his writing.

Some way through the program he mentions Amityville, and his views on it were somewhat different from how he described it in his book Danse Macabre. I will admit though that when he wrote that book it was nearly 30 years between then and the time he appeared in this program so he can be entitled to changing his opinion, albeit drastically.

I was surprised however to see him give kudo's to The Blair Witch Project and the Paranormal Activity franchise.

Luckily it was located on You Tube so it can be viewed and commented on here.

Why were you surprised by the kudos to said movies?
Top

Firstly Blair Witch, in my opinion, wasn't that good a movie. I felt the promotional leadup to the movie was all preparation for what turned out to be a disappointment. I found the jumpy camera, and the actors, very annoying - I had no sympathy for their predicament because of this.

I am not 100% sure what the critics said about it, but from memory it was not particularly favourable.

As for Paranormal Activity, it was suspenseful and worked on a visceral level, however I got a bit annoyed with the characters as well, with their incessant arguing and her nonstop complaining. Considering the predicament they were in I guess it was understandable - or maybe it was just my mood at the time which pretty much destroyed any chances of me wanting to watch the sequels.

I recall in Danse Macabre (a book King wrote in 1982?) when mentioning The Amityville Horror (the original), his description of the movie entailed the horrors of getting into a deep mortgage and losing your money - he referenced the scene where James Brolin tore the house apart looking for the missing cheque. Then at the end of the movie when they were fleeing and the house began dripping blood from the walls, that he (King) was kind of glad the movie was coming to an end.

Again, like I said before, a person's opinion can change over time. Like myself with Paranormal Activity, I can only surmise that King's frame of mind when he originally saw Amityville might not have been as tolerant as it was later - so maybe there's a lesson I can learn in this and perhaps see the movie again.

If somebody has a copy of Danse Macabre and can look up the section King critiqued Amityville, and quote it on here, I would appreciate it.
- Brendan72

Oh I agree with you about the Blair Witch – I’d go one step forward and say that I think it is just an awful movie from beginning to end. The wobbly-cam footage alone was enough to put me off, and now so many other movies have followed that style… Ok - sometimes when that effect is added in to a scene of a movie (to illustrate a viewpoint) it proves to be very effective, as with the original Black Christmas, but when the whole movie is shot like that it is just irritating!

I think sometime when you watch a movie, such as the Amityville Horror, especially if you have read the book, you’re left disappointed, as there is no better adaptation of a book than the one that plays out in your mind when you read it. Maybe this is why Stephen King had his change of heart? I admit I wasn’t struck by the movie at first, but it has grown on me over the years.
One of my favourite movies of all time is an obscure British flick called Funny Man, which I hated when I first saw it back in 1994/5. Now I love it!!!

He's got his arse-kicking boots on tonight! 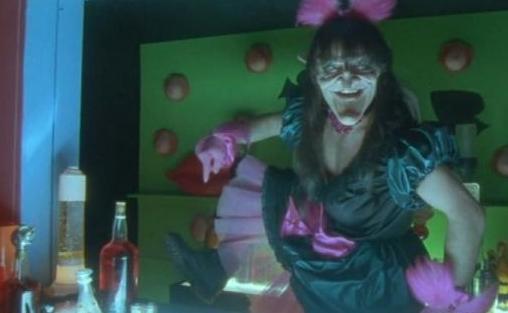 I wish I had the nerve not to tip...
Top

Many movie theaters in the US reported that the photography ['shaky cam'] in "Blair Witch Project" gave several patrons so much vertigo that a few could not reach the restrooms in time to vomit.

Charming.
"I'm gonna tell you straight up. I didn't care who they blamed as long as it wasn't me. I mean, that's the bottom line. I did not care. I didn't care then and I don't care now." - Ronald DeFeo Jr. interview for "First Person Killers"
Top

radiomixer wrote:Many movie theaters in the US reported that the photography ['shaky cam'] in "Blair Witch Project" gave several patrons so much vertigo that a few could not reach the restrooms in time to vomit.

I can imagine... But the leading actress was enough to make me vomit - snot hanging out of her nose YUK!!!
I wish I had the nerve not to tip...
Top

AKA JH70
I got yer stinkin' quarter!
Posts: 721
Location: Pennsylvania

radiomixer wrote:Many movie theaters in the US reported that the photography ['shaky cam'] in "Blair Witch Project" gave several patrons so much vertigo that a few could not reach the restrooms in time to vomit.

I can imagine... But the leading actress was enough to make me vomit - snot hanging out of her nose YUK!!!


All part of the realism I suppose. LOL

I saw "The Blair Witch Project" with my brother and nephew. At some point, my nephew wound up blowing his lunch. UGH

The part of Maryland that Blair Witch was filmed is quite beautiful. I drove through that area 2 years ago on my tour of some Civil War Battlefields
Top
Post Reply
7 posts • Page 1 of 1