I had a feeling that it wouldn't be too long after Ray Bradbury passed away that his good friend, and one of my childhood icons, Ray Harryhausen would be joining him. Harryhausen was a not only a pioneer and a genius, but a very humble man. The magical creatures he painstakingly brought to life on the screen paved the way to the modern day effects we have today. His legacy, while not known or understood by many, will last forever. RIP Ray and thank you for many wonderful memories, mostly projected onto my closet wall. 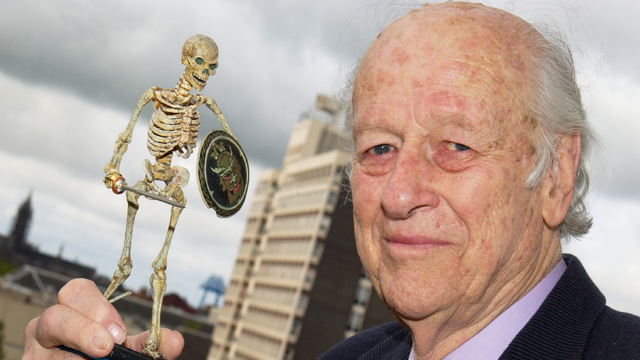 Animation effects wizard Ray Harryhausen, who pioneered many of the stop-motion techniques that have become today's industry standards, has died at 92.

Revered for his cutting-edge effects work in the '50s and '60s on such fantasy classics as The 7th Voyage of Sinbad and Jason and the Argonauts, Harryhausen developed the technique of projecting footage from the front and rear, one frame at a time. He dubbed the technique “Dynamation.”

Ray Harryhausen's work in 'Jason and the Argonauts'Utilizing his Dynamation process, Harryhausen brought to life both mythological figures and pre-historical creatures in such films as The 7th Voyage of Sinbad and Jason and the Argonauts where he created the famous skeleton swordfight. He created extra-terrestrials in such entertainments as Earth vs. the Flying Saucers and Twenty Millions Miles to Earth.

In 1992, the Academy of Motion Pictures Arts and Sciences presented Harryhausen with ah honorary Oscar, a tribute to his visual magic. He was presented with the Gordon E. Sawyer Award, an Oscar statuette, given to an individual “whose technological contributions have brought credit to the industry.”

In those early years, he performed his stop-motion techniques on very low-budgeted projects. His effects created spectacular havoc in such disaster films as The Best from 20,000 Fathoms and It Came from Beneath the Sea. He re-created dinosaurs in One Million Years B.C.

During the '70s, he created cutting-edge special effects for three films: Golden Voyage of Sinbad, Sinbad and the Eye of the Tiger and Clash of the Titans.

“They were considered B pictures because they were made on a budget. But we outlived many of the A pictures made at the same time,” he once noted.

Harryhausen considered his specialty to be creating “fantasy creatures,” where he would insert the monsters believably in the same frame as actual actors. “I don't do monsters you know. Monsters are associated with horror. I'm not interested in horror…I don't' want to deceive or frighten. I want to create illusions, fantasies, legends,” he told the Los Angeles Times in 1981.

Harryhausen inspired a cult following and was the subject of a 1986 documentary, Aliens, Dragons, Monsters and Me, directed by Richard Jones.

Other films included: Valley of the Gwangi, 20,000 Miles to Earth, First Men in the Moon, Sinbad and the Eye of the Tiger, Mysterious Island, Animal World and The Valley - Time Forgot.

Of today's films and special-effects propelled plot lines, he was less than enthusiastic: “Now you have to sit through two hours of people dying…Today, everything's so graphic it's rather unnerving.”

Ray Harryhausen was born June 19, 1920 in Los Angeles. As a child, he saw King Kong and was dazzled by the special effects, becoming as, he said, a "King Kong addict.” He was inspired by King Kong effects guru Willis O'Brien. As a child, Harryhausen paid a visit to O'Brien's home, showing him some amateur creatures he had created. Also,while in high school, Harryhausen joined a sci-fi club and met up with two enthusiasts who would become lifelong friends: Ray Bradbury and Forrest J. Ackerman.

He was an avid photographer and attended Los Angeles City College where he studied photography and sculpture. He went on to USC, he where studied drama and art direction. After graduation from USC, he worked on George Pal's animated Puppetooons. He entered the service during World War II.

After being discharged, Harryhausen began his movie career in 1949 with Mighty Joe Young, where his boyhood hero, Willis O'Brien,” was chief technician. In 1953, he was hired by Warner Bros. to be in charge of special effects for Beast from 20,000 Fathoms, where he implemented his split-screen technique to insert dinosaurs and other awesome creatures into the story backgrounds.

He next worked on three science fiction films at Columbia, including The 7th Voyage of Sinbad, a documentary which was highlighted by his monsters interacting with the stars and buttressed by Bernard Herrmann's tempestuous score.

In 1981, Harryhausen was honored with an exhibition and retrospective over an entire month by New York's Museum of Modern Art. He was later paid tribute by the American Cinematheque.

In 2006, Harryhausen was honored with a retrospective of his works at the historic Byrd Theater in Richmond,Virginia.

He was married to Diana Livingstone Bruce.

This is totally sad, he was great. I'd still prefer his effects over crappy CGI.
Okay, I see you there! There's a 12 gauge shotgun, waitin' for anybody trespassin'!
Top
Post Reply
2 posts • Page 1 of 1